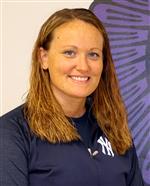 Leonard, a 2000 graduate of the Hannibal Central School District, was named Middle School PE Teacher of the Year for New York state. She will join PE teachers from across the state during an annual conference and awards ceremony in late November at the Turning Stone Convention Center.

“I was shocked when I found out,” Leonard said. “It is quite the honor to be recognized on the state level.”

The award comes two years after she earned the Central North Zone Middle School PE Teacher of the Year distinction. That award came after a nomination from Fairley PE teacher Lynn Halliwell, who praised Leonard for her commitment to her students’ health and physical well-being.

“The best part of the job is being able to make connections with the kids,” Leonard said. “They relate to me because I graduated from here and I take pride in being part of this community.”

Leonard noted that her success is not an individual effort, and expressed her gratitude to a strong supporting cast.

“I’d like to thank my PE colleagues and also the administration for being so supportive and letting us try new things in the curriculum,” she said.